I have continued refining my simulations to account for the progress of the COVID-19 pandemic and the potential futures that might result from it. The strong correlation of carbon emissions and total consumption suggested that atmospheric carbon dioxide concentration could be used to estimate total consumption; I would then project total consumption along with the ratio of needs to remaining resources based on population projections made from pandemic global death statistics and my simulation (Green Prime) of population without the pandemic.

A curve fit of carbon dioxide concentration and total consumption automatically factored in the effects of natural contributors and the cumulative aspect of consumption and extracted the resulting consumption, as shown below. 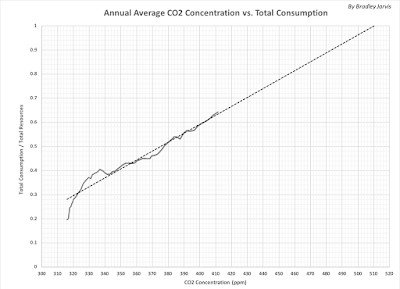 I updated projections using weekly mean concentration and the average difference between Green Prime population and total deaths from COVID-19. The current projections are shown below. 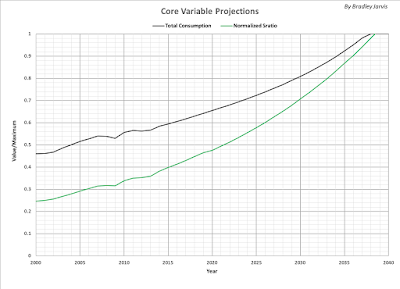 Despite the apparent convergence of deaths toward a maximum beginning in May, the projected population (“R Projected”) suggested a much different situation. This was perhaps due to an excess of deaths by people who couldn’t be treated for life-threatening conditions other than the virus, or it was due to underlying growth in the virus-related deaths, or both, but it convinced me to continue allowing the possibility of greater growth in deaths as shown in today’s population projections below. 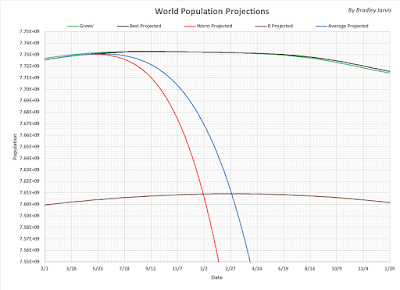 Projecting global variables into the future based on current data shows that the virus would result in one year less of survival for our species, as shown below. 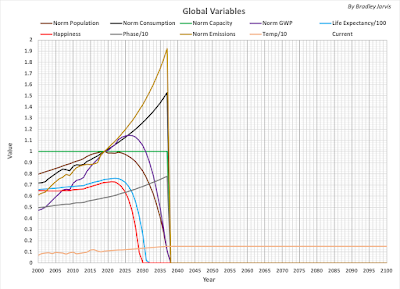 Reducing per-capita consumption (ecological footprint) would still extend our remaining time, although temperature would continue to rise. The following graph shows one such scenario: a 2% annual drop until just needs are being met. 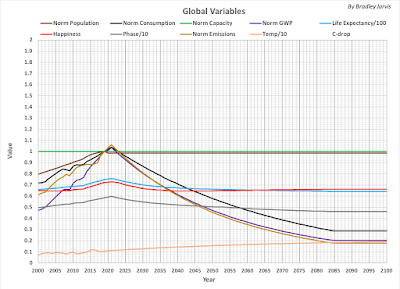 Another option is to freeze consumption at peak happiness and life expectancy as shown below. This would result in temperature exceeded the 2-degree Celsius threshold earlier, which would likely force a decrease in population. 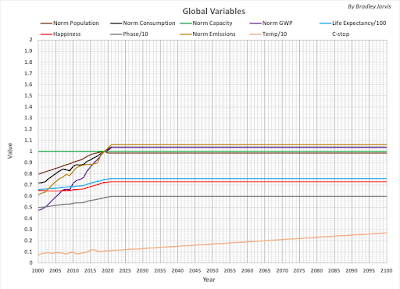 Posted by Bradley Jarvis at 11:52 AM No comments: