Shortly after discovering that constant capacity (total ecological resources) provided a better fit to historical data by my Timelines model than my baseline simulation (“Green”) that decreased it, the COVID-19 pandemic threatened to significantly change the world’s population-consumption trajectory on its own.

The model has two main purposes: to help people judge how to live their values and understand the effects of doing so; and to identify ways to avoid humanity’s extinction. Simple curve-fits to world deaths from the pandemic suggested that, left unchecked, it could result in extinction by August of next year. I knew enough biology to dismiss that as highly unlikely, but it would almost certainly result in a population peak, and close to the time that my new simulation (Green’) was indicating. 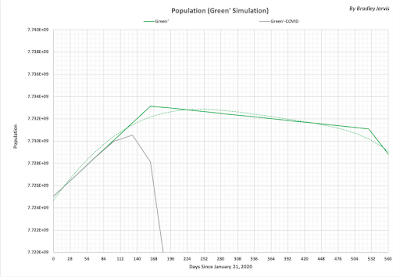 ABOVE: Projections of population for simulation Green’ and with projected COVID-19 deaths (as of March 31, 2020). Unchecked deaths would result in extinction, a population of zero, by day 560 (August 3, 2021).

If the new population reached its peak on schedule around September 1, 2020, and then synchronized with the Green’ population projection, the net deaths would be the difference between the values of the two peaks. The virus would essentially wipe out the gain in population since mid-2019 that appears at the resolution of weeks instead of years. 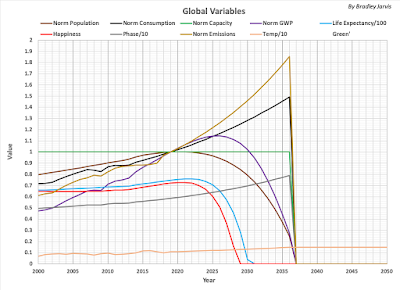 ABOVE: Global variables projected for simulation Green’ at mid-year 2000-2050.

If the average population and per-capita consumption stay at the 2019 values from 2020-2021 (to crudely account for reduced activity as well as population), the model projects that extinction will occur one year earlier than otherwise, as shown below. 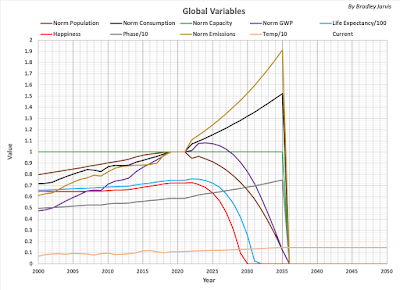 Looking ahead toward how to achieve the primary goal of avoiding extinction, the prescription remains the same as before: reduce per-capita consumption as soon as possible while maintaining constant population. A 2% annual reduction from 2021-2062 would keep the global temperature anomaly below the catastrophic level until 2100, as shown below. 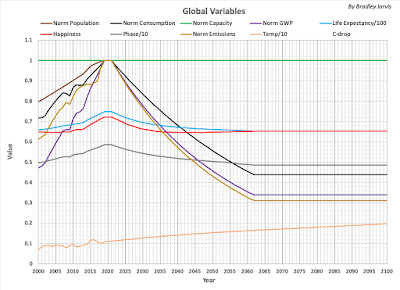 Doubling the decrease in per-capita consumption until only basic needs are met, as shown below, adds another 50 years to the time when the maximum temperature is reached. 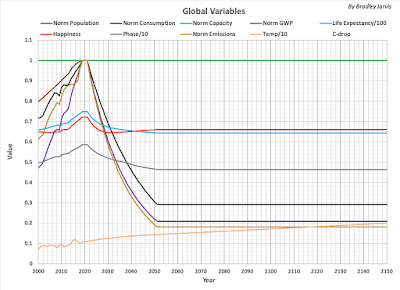 Note that these projections reflect my personal valuing of human life. Letting population decrease instead would keep per-capita consumption at an arbitrarily higher level, even though the economy would likely drop more (because it depends strongly on the number of transactions, which varies with the square of population).