Learning As We Go

This week my contract ended and I'm available for work. I've done technical writing about as long as test engineering (14-15 years). Add 12 years of part-time or full-time educational research. Throw in “free time” of writing, research, and other art of my own, and it’s a start.

I try to learn as much as I can so - given enough time - quality matches or exceeds quantity of what I produce. Positive experience is most likely if the definition of quality is the same for producers and consumers, so finding what it is for each is part of that learning.

Understanding the time and resources needed to achieve mutually acceptable quality is part of learning that can ensure fair trade of products and services that embody them. That trade is also part of the experience, beyond use of what’s traded.

Effects of producing and trading on others (not just people) should also be understood, since they have value that may not be included in definitions of quality for what is traded. Neglecting this third “dimension” of learning is fraught with danger for all concerned.

What I’ve learned and ways to better learn are what I’ve carried with me from job to job, while money has evaporated and sometimes the projects have too. For me they’re embodied in the process of living, which I’m doing wherever I am, increasing them however possible.

A “job” in the wild is how one contributes to the life support system that everyone is an integral part of. The key feature, life, is increasingly optional in the substitute systems we humans create and inhabit, where quality can be defined with or without it.

In my “free time” research, I’ve learned that life support isn’t just getting what we need to live, it’s supporting the life that provides it by not consuming too much of it and the life it depends on. Whatever we do must include that as a priority, or risk mass death.

Getting to the point where I understand all of this ideally should have been a “start” to my career instead of coming so close to its end. My skills and hopes are based on the trajectory I followed, which diverges radically from the path I and the world must follow next.

Posted by Bradley Jarvis at 5:12 PM No comments:

Next month will mark three years since I quit my job to work full time on completing decades of research into how actions serve values and translate into global consequences. Beginning with the primary value of survival (because without survival there can be no other values) I had focused on how many people can exist, for how long, and under what conditions. The scope broadened to include life satisfaction, or happiness, which correlates strongly with the number of resources people consume that are provided by other species. Statistical analysis of historical data for population, life expectancy, economic activity, and other variables revealed other correlations that tracked consistently throughout the data and suggested a theoretical framework that linked them together.
Translation of the resulting mathematical model into experiences of individuals and groups enabled testing by comparison with events and stories from the past and present, along with projections of potential futures. The potential futures were extremely disturbing, since they indicated a high probability of an extinction-level population crash in the near future. Because of this, I worked mostly on deriving alternatives and actions that would enable them, much as I had used models of equipment and conditions to troubleshoot problems that I found during my career as a test engineer. I concluded that effort last year after simulations incorporating global warming variables and the effects of the COVID-19 pandemic converged on a narrow range of actions that might significantly delay catastrophe.
With my savings starting to run out and hardly any income from the writing business I hoped could support my efforts, I spent more time searching for another paying job. This experience has been both a necessity and a test case for how to live based on what I learned. Reading hundreds of job descriptions has reinforced a lesson learned during past job hunts and embedded in my model: money flows toward those taking risks to find, exploit, and trade resources that can be used for future growth. Servicing those people or becoming one of them is increasingly a key to individual survival; it is also a surefire way to help decrease the longevity of civilization by eliminating other species that we depend upon for our collective survival because there are no new ecosystems that can sustain us. The fastest and most direct way to extend our lifetimes is to clean up and leave habitat we have taken from use by other life, which is the opposite of what our economy rewards.
Hunting for income triggered an evaluation of successes and failures in past jobs so I could find better matches in the future. Defining success as the meeting of my expectations and my employer’s expectations with minimal difficulty for both of us, I realized that success for me depends on matching my responsibilities with my values. Ability is another factor, but I’ve been able to learn and adapt quickly enough in most situations to keep it from being a major one. Failure, when I experienced it, was typically associated with a conflict between an employer’s expectations and one or more of my values which couldn’t be remedied to the satisfaction of both of us.
This insight about employment suggested a new way to characterize the results of my research, which I was coincidentally starting to formalize as a scientific paper that could be reviewed by academics and others for strengths, flaws, and potential use in further research. A person in any of three relationships with their environment (growth, overshoot, loss) focuses on attaining one or more states of being (survival, happiness, longevity) for one or more groups (self, other people, all people and other species). Values and responsibilities can both be categorized by focus, which usually includes self-survival, self-happiness, and self-longevity. 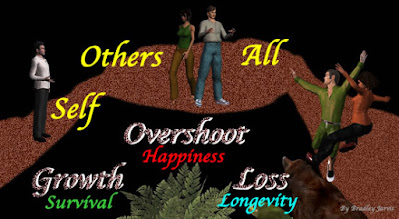 Relationships to environments tend to predispose the people in them to get what they don’t have enough of, so the relationships can be used as proxies for common sets of values and responsibilities. In general, everyone prefers to be in the overshoot relationship - every person that is, since overshoot involves our consuming more than other species can replenish and therefore depends on them dying off. The inevitable decline in resource availability reduces how long the population can survive (its longevity), which is felt by individuals who are forced into the loss relationship and therefore value reversing what caused it. Meanwhile, people in the growth relationship value survival of themselves and people in their closest groups; this drives population growth along with individual consumption that increases happiness by enabling creation of personalized artificial environments.
Although most of my life has been spent in overshoot, I was strongly influenced by a culture of growth. I also experienced loss and have accepted its all-inclusive values. I’ve been questioning the wisdom of unlimited consumption and its impact on longevity since I was 16 years old; and for various reasons I avoided situations where I might have children until it was practically too late. As an older adult facing loss again while trying to maintain a hold on overshoot, I know from my research that the world as a system is about at the same point and is on the verge of moving every person and other species into the loss relationship either by choice or by force.
The scenarios that I derived for delaying catastrophe are simply summarized by one rule: Avoid loss. Keeping everyone from being in the loss relationship with the environment starts with freeing up habitat for those already there, which my most-likely scenario estimates could be 5/6 of the world’s population by mid-year. Completing that move by the end of this decade could also keep global warming from making parts of the world uninhabitable while we develop ways to reclaim even more habitat and learn to live with the result. Notably the (simulated) last time no one was in the loss relationship was in 2001, and the last time no one was in overshoot was in 1949, which provides some historical context for what we might expect. 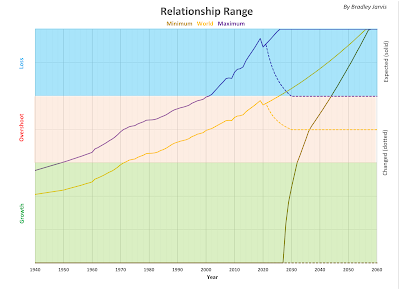 As improbable as that scenario is, I suspect another one may be emerging that could be considered just another version of catastrophe by those valuing all life. Humanity’s ability to consume more than what other species can provide without harm (thus “overshoot”) is a consequence of large-scale replacement of natural habitat with artificial environments that contribute to happiness and together can be considered artificial habitat. In the new admittedly speculative scenario, attempts to escape the deathtrap caused by reducing the amount of remaining natural habitat are enlisting molecular engineering and machine intelligence to create a new biology that totally redefines what and who we value, including ourselves and our needs. Time is running out for this scenario to play out: my model projects that, on the current trajectory of consumption, people will start dying from lack of habitat by 2026 and humanity will be extinct by 2057. For the new scenario to match the expected one (and what I consider a reasonable timeline for new technology rollout), this may be a manifestation of how the rest of the population transitions from growth through overshoot over the period 2028-2044 while so many others are dying.
The next two decades will either validate or invalidate the concepts I developed over the past two decades. Since exploration is a process and not an endpoint, I expect that if I’m alive then I will have asked many more questions than I answered while helping to more effectively find other answers; and I will be happy to have done so. To the extent that my efforts, whatever they are, contribute to creating a longer and better past for those whose lives I affect directly and indirectly, my life will have served my values. By that standard, I intend to increase my overall positive impact until I can’t, choosing appropriate responsibilities along the way.
Posted by Bradley Jarvis at 3:13 PM No comments: