Global warming continues to generate bad news for the present and the future:

Meanwhile, the legislative branch and the governments of several states in the nation most responsible for the problem (mine) are actively trying to convince its citizens that the problem doesn't exist, and that it is acceptable to continue the actions that precipitated it. These actions benefit individuals and corporations who stand to lose large future profits if the actions don't continue, and who bankroll the campaigns of politicians who spend more time pandering for money than developing the legal framework for maintaining our increasingly complex society, which is arguably much more than a full-time job by itself. That complexity, and the inherent limitations of our minds and bodies in dealing with it, along with arbitrary values and knowledge unshared and untied to the realities of community survival in this new world, is fundamentally inhibiting the responsible application of the power granted humanity by its numbers and its technology, power which has enabled our present, existential crisis.

Ironically, reducing the complexity and the power likely have the best chance of reducing our risk, but it will also reduce our domination of the natural environment that is the measure of happiness that we are most tuned to. Some of those who resist such a reduction seem to have put their hopes in advanced technology, effectively outsourcing mental effort to computers now on the verge of artificial intelligence, and attempting to reduce our dependence on wild species for maintaining Earth's habitability by tinkering with their biology and ours. The resisters may however be trading one set of problems for a potentially more dangerous set, as some of the smartest (human) minds have warned regarding artificial intelligence.

Luckily for most of us, complexity is built upon simple building blocks and relationships; and with some training and freedom to explore and think about what's around us (instead of being slaves to our jobs, our tools, and distractions), we can use that fact to make a dent in creating a more healthy part of the world for ourselves and those we come in contact with. Global warming, for example, is a special case of too much waste in an effectively closed system like the Earth, a consequence of our physical relationship with Nature that people throughout the lifetime of our species have understood, or learned the hard way (as many of us are doing now). 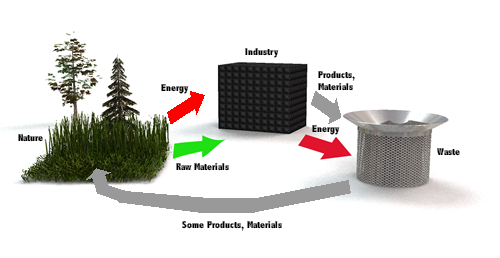 When we acted as part of Nature (ecosystems) instead of apart from it, energy and materials cycled through us with negligible waste, where "waste" is the result of an activity that is unused or unusable by life for a period of time. Now we generate much more waste, and those materials (including gases) that do enter ecosystems can either be used by life, harm it, or kill it, at least until something evolves that can use (consume) it. One way to judge whether we are creating too much waste is to observe whether the amount of animals and their variety is decreasing around us, which is a basic sense built into our own biology. Clearly we are failing that test, and are on the way to failing the ultimate test while we keep doing so, as the growing list of hazards and catastrophic events stemming from global warming clearly indicates.