We each interact with people, our physical environment, and abstract constructs that help us understand and deal with ourselves and our world, and that give it all meaning. Also, the physical environments interact with each other. Descriptions of these interactions and those that participate in them together comprise a basic collection of information relevant to a given population of people over a limited range of time when the information doesn't change appreciably.

If we could write a book of these descriptions, its size would be a measure of the complexity of the system that includes the people and their environment that is comprehensible in terms of human experience. It could therefore be potentially usable for directing activities toward goals on a human scale, by projecting how future "books" might appear. If it was too big and unwieldy to be used by the majority of people, that fact could itself be used to identify how out of control our lives have become.

Books have words, of course, and one way to estimate the number of words is to use the best known book of all: the Bible. The popular King James Bible has an average close to 24 words per verse, 24 verses per chapter, and 24 chapters per book. The number 24, besides also being the number of hours per day, is also close to the square of the number of commonly used personality dimensions (the "Big Five"), and a commonly used minimum population size for getting good statistics during measurements. If one of our "descriptions" has the same number of words as an idealized chapter of the Bible (24-squared, or 576), and a person can read at a speed of at least 250 words per minute, then a chapter will take about one-quarter hour to read. If a description is only 24 words (equivalent to a verse), then a chapter will take only about one-half minute. Ultimately, though, the number of words defines how detailed our descriptions will be, and it should be chosen to match the level of detail that's meaningful.

The Bible's significance, of course, far transcends its popularity. For one thing, it has functioned as a universal guidebook for living and meaning for much of the world's people, despite the fact that the kinds of environments and social interactions it describes have become less common in the millennia since it was written. As such, it may be a useful benchmark for the amount of complexity that is useful in performing such a function, though the proliferation of clergy and scholars enlisted over history to interpret its guidance indicates that its complexity may be too much for common use.

More research needs to be done, especially around the constructs that embody values, meaning, and rules of conduct that ideally enable people to maintain the integrity, survival, and basic thriving of their society. The Bible appears to have started from a set of initial conditions that include the constructs, and then progressed through at least two iterations of experience, learning from the experience, and updating the constructs based on what was learned. If its particular template is to be followed, then our new world community is in the lessons-learned phase of an iteration where millennia of new experience is being processed as much more experience continues to be added.

We can now quantify the magnitude of this task by equating experience with complexity. Based on population size, world complexity is now 1,260 times what it was when Christianity started (50 million times what it was at the beginning of civilization), and is rising rapidly, having multiplied by a factor of ten in just the last 70 years. 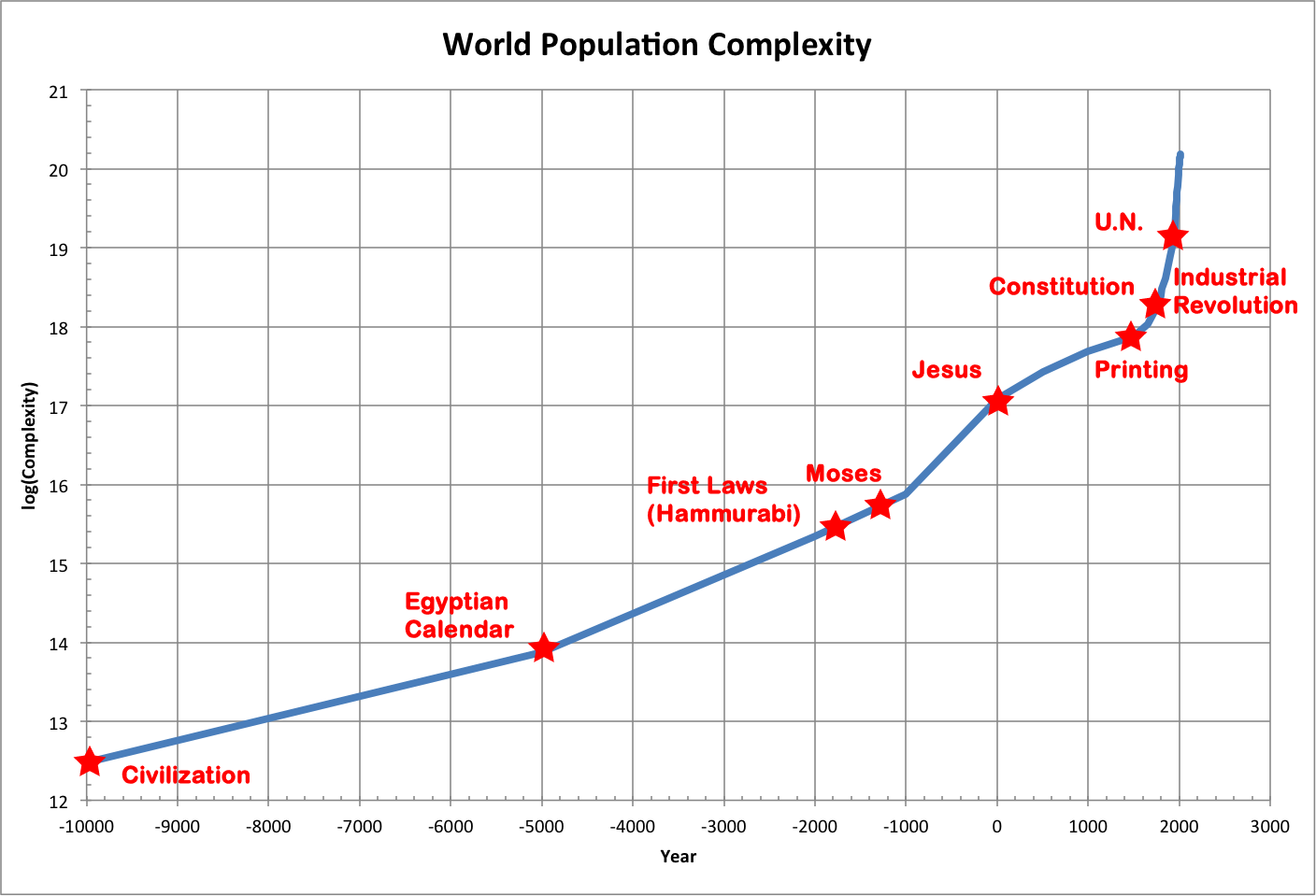 In light of this, it would not be surprising if people are concerned that their lives are losing meaning and losing control. If governments and their laws, as well as science and technology, are civilization's primary means for enabling more complexity as well as keeping up with it, as history seems to indicate, then they could rationally be blamed when that complexity becomes personally unmanageable, especially as it is coupled with experiences of negative effects of environmental degradation stemming from the consumption that they also enable.

If this analysis is correct (as a contribution to the "lessons learned"), along with predictions of disastrous consequences of not reducing our depletion of species and resources that maintain the habitability of our planet, then an appropriate course to ensure our survival as a species is to first focus on stopping the growth in complexity and better managing what we have. This would involve an overhaul of our values and means of determining how to meet them (our common, internalized constructs), along with promoting the social and environmental interactions that support those goals, which will likely include restructuring our institutions rather than crippling or destroying them as a knee-jerk response to our frustration with the complexity they represent. Next, we might let our population naturally decrease to a sustainable level while simultaneously changing our physical and social infrastructure to reduce our ecological impact to a safe level and ultimately accommodate a simpler, healthier, and more meaningful life for individual people and other species that can help support them.

See the updated page linked to the graph for details about the model and simplifications used in the blog post.